Here is an 8k 360-degree video of the abandoned zoo in Central Florida we posted to our YouTube Channel. Make sure to subscribe to our channel to help support us and to get notified about new video content we upload!

About the abandoned property

Located in Kissimmee, Florida the Jungleland zoo once was home to a range of animals such as spotted hyena, bobcats, Bengal tigers, birds, alligators, and even a 450-pound lioness that escaped but was recovered a few days later. The zoo was also home to Stinker the Monkey, who would ring a bell if you gave him food. The site first opened in the 1970s at Alligatorland Safari Zoo and housed over 1000 exotic animals.

There was a large alligator statue crushing a jeep and a guy hanging on with a rope out front along Highway 192 but was torn down in 2014. You can see the statue in the above 360-degree virtual tour.

The property is about 7-acres total and has a 9,700 sq ft building at the front of the property, which was not explored since there was what looked like construction or remodeling going on. The back of the property where the big cat cages and other animal attractions were located were explored and photographed. Please note that the property has been purchased, cleaned up, and is no longer abandoned.

Did you find this post interesting? You might also like viewing the abandoned Glass Bank of Cocoa Beach or the abandoned Operations Control Building at the Cape Canaveral Space Force Station. 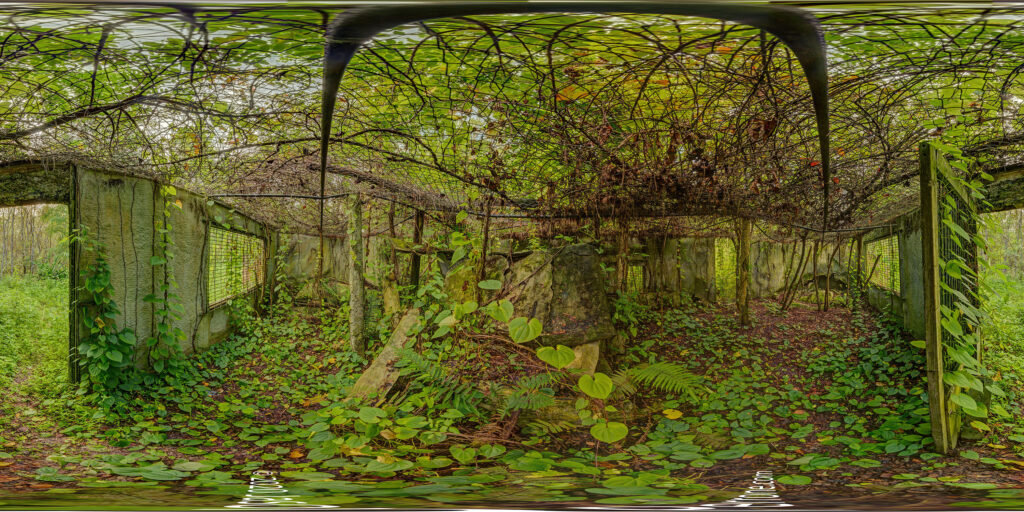 360-degree panoramic image captured inside a cage at the abandoned Jungleland Zoo in Kissimmee, Florida.

Do you like exploring abandoned theme parks? Check out these photos of the remains of the Bongoland theme park. How about an abandoned Florida Stadium?

[…] You might also find this abandoned power station in Western Australia or the abandoned Jungleland Zoo. […]