Explore the Glass Bank of Cocoa Beach with this 360-degree panoramic virtual tour of the abandoned local landmark.

Here is an 8k 360-degree video we posted to our YouTube Channel. Make sure to subscribe to our channel to help support us and to get notified about new video content we upload!

Do you have 360-degree panoramic images captured in an abandoned location? Send your images to Abandonedin360@gmail.com. If you choose to go out and do some urban exploring in your town, here are some safety tips before you head out on your adventure. Here is a list of all the abandoned locations around the world that are featured on Abandoned in 360 website.

About the Glass Bank

The Cocoa Beach Glass Bank, officially known as The First Federal Savings & Loan Association of Cocoa – Cocoa Beach Branch, was a five-story glass building in Cocoa Beach, Florida. It officially opened in April 1962, and fell into disrepair in the late 1970s after the end of the space race. When the building opened in April 1962, besides the bank, the top floor had a restaurant called the Sky Room. Guests could enter and watch space launches from nearby Cape Canaveral. However, when the building was finished in 1961, it had a major flaw; there was no elevator to the upper levels, which ultimately led to the Sky Room closing permanently in 1963. The issue was resolved that same year when an express elevator was added to the building. After the addition of the elevator, Ramon’s Rainbow Room opened up at the former Sky Room space. Ramon’s was a restaurant and a nightclub tenant that featured food, music, and an atmosphere which proved popular in the era. It also hosted astronauts, celebrities, and politicians on special occasions, and often drew crowds. It was known for its cocktails, jazz music, and good food.

In 1983, an attorney named Frank Wolfe purchased the top of the building. He then added a windowless penthouse, and converted it into a brutalist style by reinforcing the corners of the building with concrete. n the late 1980s, due to the savings and loan crisis, The First Federal Savings & Loan Association of Cocoa was declared insolvent and was immediately closed by regulators, at that point, First Federal was the last original tenant at the Glass Bank, twenty-years after its existence.

In the ensuing decades, damage to the lower floors would be sustained by hurricanes, especially Hurricane Frances. This led to the remaining tenants including Space Coast Credit Union, and a gym, to vacate the spaces, leading to the building becoming abandoned. The Glass Bank Condominium Association (GBCA), which owned the entire building sans the penthouse, wanted to restore the building to its original form. Frank Wolfe refused, and as the stalemate dragged on, the city began fining the co-owners $200 a day. In 2013, the GBCA sued Frank Wolfe for money owed to the city and to the condominium for repairs. In response, Frank Wolfe countersued.

To break the legal stalemate, the city urged the GBCA and Wolfe to agree to demolition, in exchange for waiving fines. The GBCA agreed, but Wolfe did not; asking the city to buy the penthouse instead if they wanted it to be torn down. The city refused to purchase it, and moved to demolish the structure regardless of his wishes. In January 2014, the city sought and obtained approval for demolition, which shut down power and water to the penthouse floors. On February 4, 2014, the GBCA prevailed in its lawsuit against Wolfe, with the court ruling in their favor. The next day, Wolfe’s appeal of the approval was rejected. That afternoon, Wolfe took his own life by gunshot in front of the Glass Bank.

Wolfe’s estate cooperated with the decision to demolish the building and in April 2014, the city was granted final permission to perform it. In December of that year, demolition began with asbestos being removed from the building. On February 2, 2015, the building was demolished.

Please note this building was demolished in 2015 and is now just a vacant lot. View the images on Google Maps. 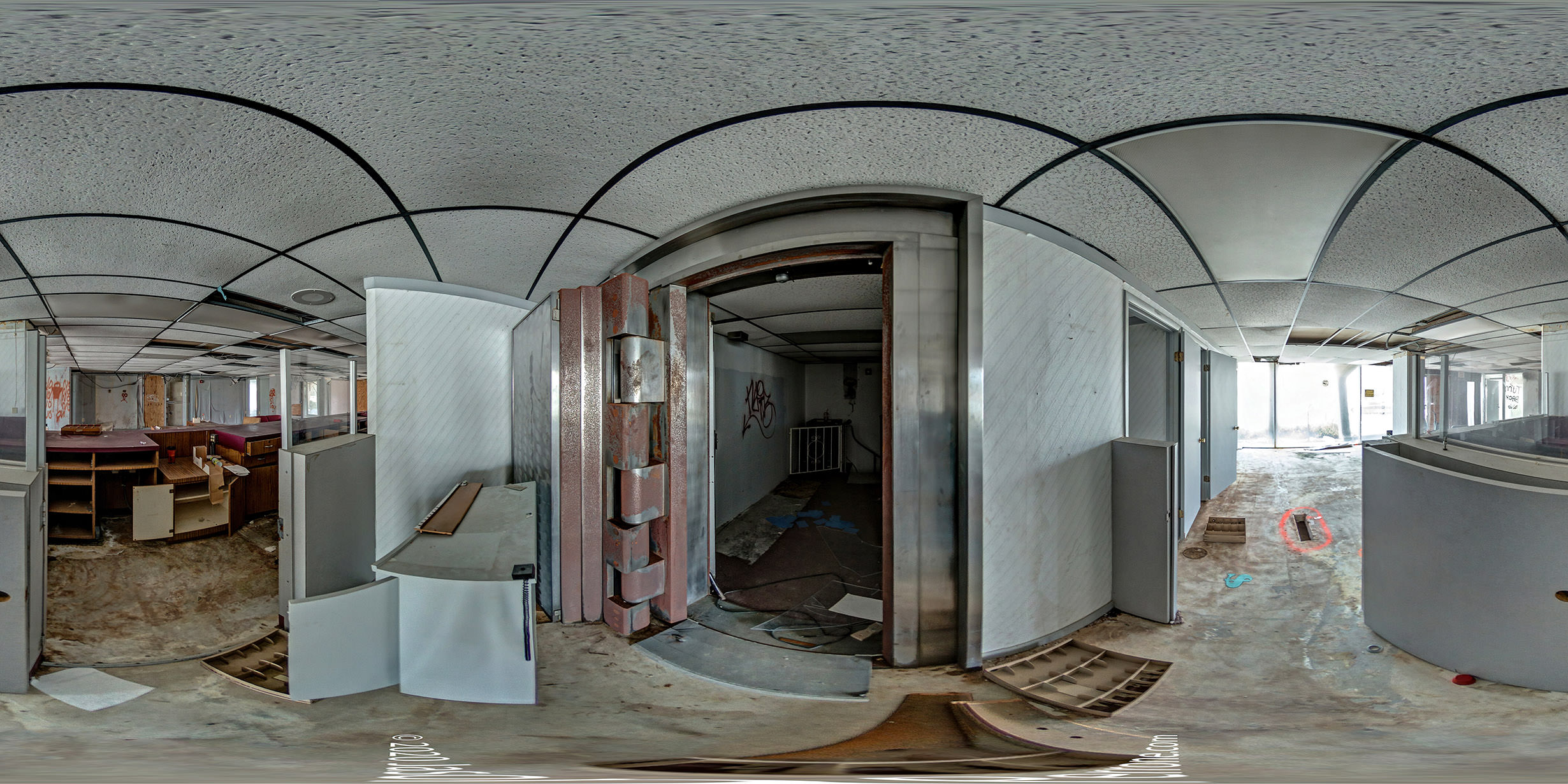 Equirectangular panoramic image of the vault inside the abandoned Glass Bank in Cocoa Beach, Florida

Did you find this post interesting? You might also like viewing the abandoned Jungleland Zoo or abandoned Operations Control Building at the Cape Canaveral Space Force Station.

[…] you find this post interesting? You might also like viewing the abandoned Glass Bank of Cocoa Beach or the abandoned Operations Control Building at the Cape Canaveral Space Force […]

[…] Not much information could be found on this abandoned business in Apopka, Florida, but on Google Maps they sold pond plants and waterlilies according to a sign out-front of the business. Did you find this post interesting? You might also like viewing the abandoned River Preserve condominium or the abandoned Glass Bank of Cocoa Beach. […]

The River Preserve - Abandoned in 360 Reply

[…] Did you find this post interesting? You might also like viewing the abandoned tree nursery in Central Florida or the abandoned Glass Bank of Cocoa Beach. […]