Take a 360-degree virtual tour of the historical Jarvis Palmer House that is located within the Great Smokey Mountains National Park on the North Carolina side. Below are twenty-seven (27) panoramic images where you can look around the property, inside the barn and of course inside the house.

About the Historical House

Nestled within the Great Smoky Mountains National Park in the Cataloochee region, which was once home to a thriving community of over 700 people who settled in the valley in the 1800s. The people who once inhabited the land were forced to move in the 1930s and 1940s. The government had established The Great Smoky National Park to protect the land from loggers. Of the 200 homes that once stood, only a handful are left, and they are open to the public. The Jarvis Palmer House is one of the many homes you can visit as an urban explorer or a tourist to take in the breathtaking sights surrounding the historic home as you immerse yourself in history. The Jarvis Palmer House is the best-preserved home within the community and is used by the National Park as a place to exhibit and showcase information and photos of the people who once inhabited the land.

The History of the Jarvis Palmer House

The Jarvis Palmer House, like many of the homes in the area, was originally built as a log cabin and renovated by simply applying wood panels and weatherboard to encase the original structure. It’s located just off the Cataloochee Creek Road and easily accessible for anyone to enjoy. It’s often the starting point for explorers as they make their way to other structures that still stand within the Cataloochee region.

The Jarvis Palmer House was built in 1860 by George Lafayette Palmer after losing money from gambling and having to pick up his family and move. They landed in Cataloochee and settled in, soon becoming one of the more prosperous families that settled. The main house consists of two separate structures combined by one share roof called a “dog trot” house. George completed the renovation transformation from the log cabin to its current structure between 1900 and 1905.

After George Palmer passed away, his son Jarvis Palmer inherited the home, giving it the name it has today. Once he inherited the home, he added a two-room kitchen and dining room house, which is now the exhibit area for visitors to learn about the history.

The Jarvis Palmer House consists of several buildings in addition to the main house, all of which are open to exploring. Inside the house, the walls are covered with old newspapers as wallpaper. You can look over the preserved newspapers and learn about what was newsworthy in the early 1900s and late 1800s.

There is a large three-level barn on the property and a springhouse for storing foods to keep them cool. Several bunkhouses were built to accommodate fishermen who came to fish in the nearby creek. All buildings are open to the public to explore. People can use the built-in ramp to access the top level and enjoy incredible views of the park and the Jarvis Palmer House.

The Jarvis Palmer House is a perfect first stop to learn an in-depth account of the community and the history of the land. Most people spend most of their time exploring the house and the surrounding structures before they head off to enjoy the other building available to explore.

Here is an 8K 360VR video of the property 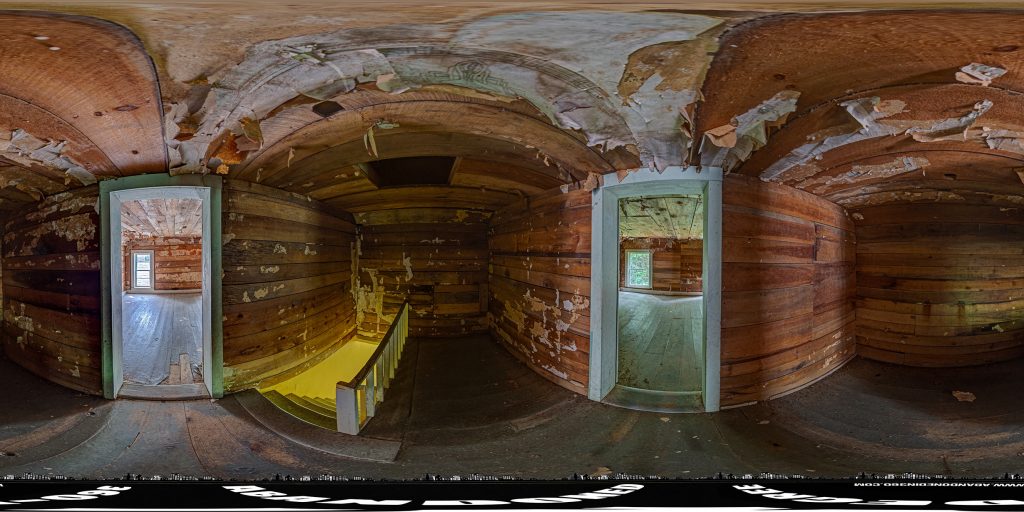 Second floor inside the Jarvis Palmer house in the Great Smokey National Park in North Carolina.

Other nearby locations that you might find interesting include the Beech Grove School, Palmer Chapel Methodist Church, Steve Woody House or the Hiram Caldwell House.

[…] requires a small hike, it’s a little less busy than the other homes within the area, such as the Jarvis Palmer House or the Hiram Caldwell House, making it a more peaceful adventure. Visiting these homes gives you a […]

[…] cool abandoned locations throughout Melbourne, Australia. You might also like the Jupiter Dungeon, Jarvis Palmer House, the Blub Swimming and Leisure Center in Germany, or the abandoned assisted living facility in […]