Located in Britz near the Teltow canal near Berlin, Germany, a once popular swimming pool complex now sits abandoned, awaiting the completion of demolition to make way for luxury apartments. Blub, short for Berliner Luft und Badeparadies (Berlin Air and Bathing Paradise), once attracted hundreds of thousands of visitors yearly as one of the most popular attractions in Germany. The decline of the swimming and leisure center began shortly after the Fall of the Berlin wall.

The History of Blub

The Blub was once an outdoor oasis that sparked joy and excitement for visitors of all ages, created by Harold Frisch. It was built as a massive, premier swimming pool and leisure center, sparing no expense and costing an estimated 44 million Deutschmarks. When it finally opened in 1985, it became one of the most visited attractions in German.

Over 8.6 acres, Blub included a vast array of water features and facilities, including both indoor and outdoor pools. Other exciting features included hot whirlpools, geysers, fountains, pristine gardens, saunas, a kid’s playground, and a gym. It also featured a popular waterslide that had a 120-meter drop. Later on, construction completed building a “crazy river.” Blub was a great place to spend warm days during the summers.

The decline of Blub is still relatively unknown, but many people believe the decline had a lot to do with the reunification of Germany in 1990. The stark drop in visitors began shortly after this event, and a definitive connection has never been established.

With the rapid decline in visitors, the Blub slowly became overrun with rats. At the end of 2002, the rat infestation became so bad that health authorities shut down Blub quickly. Frisch set out to clear the infestations by hiring pest companies and setting traps to no avail.

After the shutdown, the location continued to decline as the crowds became unsavory, as gangs began to linger around the park, scaring off guests. Even with security guards in place and a pest control plan, the numbers continued their decline. Frisch ended up having to declare bankruptcy and, in an attempt to revitalize the site, spent 4 million Deutschmarks on an “Al-Andalus” sauna renovation.

Blub finally closed in 2006, with the Al-Andalus Sauna and the gym remaining open until 2012. Over the years, the rats and graffiti slowly took over the location, and several fires destroyed many parts of the buildings.

Frisch had continued his efforts to revive the long-abandoned waterpark, finally giving in and selling to investors. Frisch passed away on February 14, 2020, exactly 35 years from the day of the park’s opening.

Blub is currently in the process of being torn down to make way for a luxury apartment complex after the purchase of the site by Munich-based investors. The new apartments are to house a modern and innovative housing model to appeal to all and bring life to this once abandoned and derelict area. 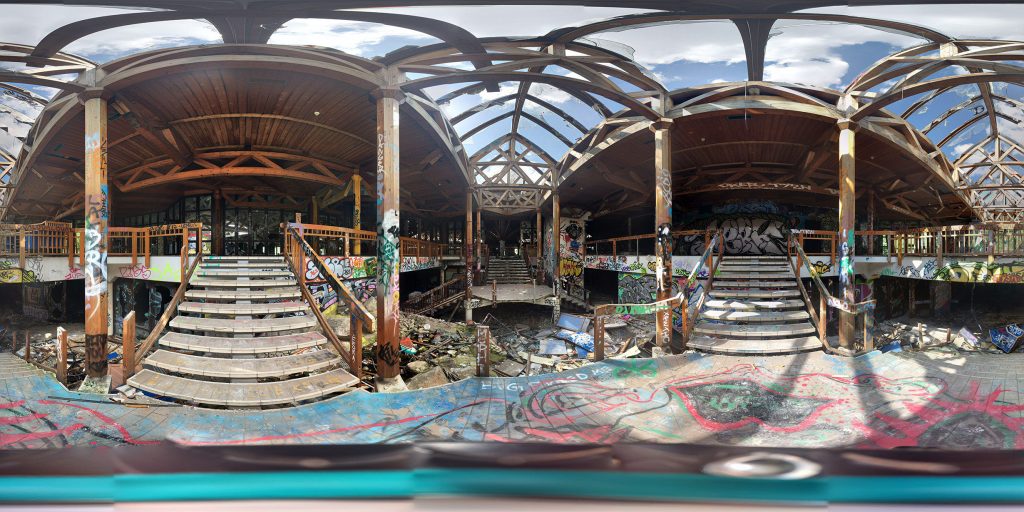 Other abandoned locations around the world you might find interesting, the Larundel Mental Asylum in Australia, the Quinta de los Ruiz in the Canary Island or the Bumby Hunting Camp Ruins in the United States