Explore the Bulow Plantation Ruins in Flagler Beach, Florida with a high resolution 360-degree panoramic virtual tour. There are sixteen 360-degree images in the virtual tour below, so make sure to click through and explore all the photographs.

Here is an 8K 360VR video of the Bulow Plantation

About the Bulow Plantation Ruins

The story of the location begins in 1821 when Major Charles Wilhelm Bulow acquired 4,675 acres along a tidal creek, which was later named Bulow Creek. During that time, he had 2,200 acres of land cleared by his slaves so he could farm crops such as Indigo, cotton, rice and sugarcane. When Charles died in 1823, this son, John Joachim Bulow who was only seventeen at the time inherited the property. Years later, John built a sugar mill on the property and even hosted artist and naturalist, John James Audubon in 1832. The sugar mill is made of coquina rock, a rock composed of shells which was a common building material in the area at the time. The plantation at one time was the largest in East Florida and was operated using forced slave labor. The Bulow plantation was home to 300 slaves, according to the National Park Service. In 1835, the Seminole Indians, angry with the territorial governments policy of forcible Indian removal, attacked and destroyed the Bulow Plantation as well as fifteen other plantations on the East Coast of Florida, sparking the beginning of the Second Seminole War.

The property and ruins were later acquired by the State of Florida in 1945 and later dedicated as a State Historic Park in 1957. On September 29th, 1970, the property was added to the National Register of Historic Places. The park is now 150 acres and open to the public for a small day use fee. Learn more about the park on the Florida State Parks Website. Another interesting place to explore is the Dunlawton Sugar Mill Ruins in New Smyrna Beach, Florida. 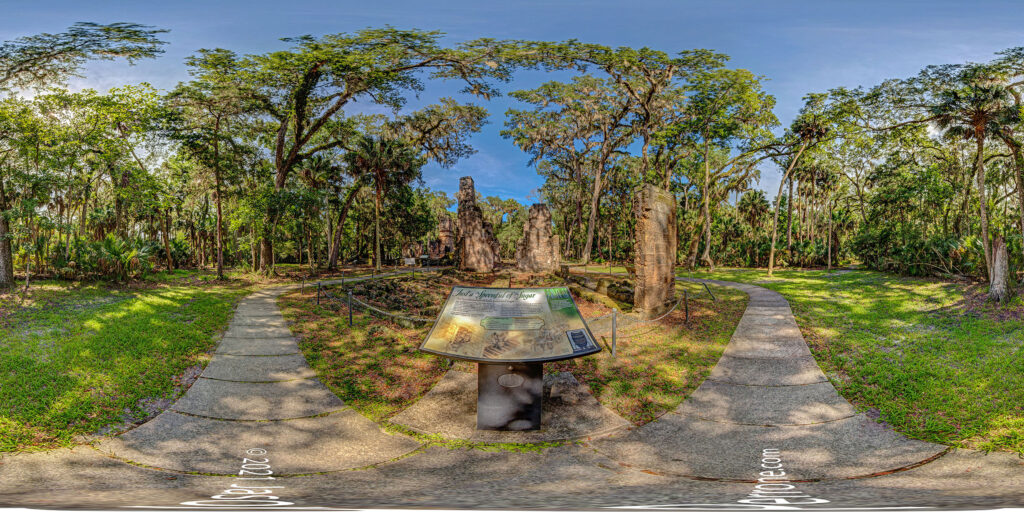 View more abandoned Sugar Mill Ruins in Florida. Do you have 360-degree panoramic images captured in an abandoned location? Send your images to Abandonedin360@gmail.com. If you choose to go out and do some urban exploring in your town, here are some safety tips before you head out on your Urbex adventure.