Take a 360-degree panoramic virtual tour the Dunlawton Sugar Mill and explore the ruins located in Port Orange, Florida from anywhere in the world. There are eight 360 virtual reality images in the tour below so make sure to spend some time looking around all of them.

The History of the Dunlawton Sugar Mills ruins in New Smyrna Beach, Florida
The ruins of Dunlawton Sugar Mills Plantation sits just a short drive from Dayton Beach and resides in the second oldest city in Florida, New Smyrna Beach. Built in the early 19th century, it was once a part of the Cruger dePeyster Plantation and now is labeled as a historical landmark. People can walk through the history and enjoy the remains of the architecture and equipment of what was once a major sugar mill.

A Brief History of Dunlawton
The mill and the garden sit on a 10-acre plot of land originally part of the 995 grant that was awarded to Patrick Dean in 1804. Patrick Dean began to grow sugar cane, cotton, and rice and was killed in 1818. Speculation is that it may have been an Indian or one of the enslaved people that worked on the plantation. The plantation was passed on as an inheritance to John B. Bunch McGrady, who sold the land to Charles and Joseph Lawton.

In 1830, Sarah Petty Anderson (Dunn), after losing her husband, purchased the Dean Plantation after selling their Tomoka property and used a fictitious name for the purchase and combined her maiden name Dunn with Lawton to create the Dunlawton Plantation. They produced sugar and molasses until the Second Seminole Indian War began.

The government decided to remove the Indians from Florida, which caused tensions to rise between the settlers and the Seminole Indians. In 1835, just five short years after Sarah and her sons purchased the property, the war had begun and threatened the area and the plantation. Nearby Cruger dePeyster Plantation was burnt down by the Seminole Native Americans, and the plantation’s enslaved people assisted in the raid that burned down the plantation and the surrounding areas.

Cruger and dePeyster moved the equipment that they could salvage next door to the Dunlawton Plantation. However, soon after, the Dunlawton Plantation was burnt down as well as a result of the conflict. Because the family had no money to rebuild, they abandoned the plantation, and it sat vacant and unused until John Marshall purchased it in 1846. He rebuilt the plantation, and it was in production until 1849 to 1853. Although it passed hands several times, it returned to the Marshall Family. Tensions in the area had begun to rise, and the Third Seminole Indian war burnt the plantation to the ground once more.

In 1862, the Dunlawton Plantation served as a headquarters for the St. John Rangers during the Civil War, where soldiers used kettles as a production for salt and ammunition. Throughout 1871, the property was sold off into smaller lots and eventually was given to Volusia County in 1963. In 1985 Martin Wittbold agreed with the county to lease the mill to bring new life to the plantation.

The plantation now sits as Dunlawton Sugar Mills Gardens, where the ruins are surrounded by incredible local flora and creative projects created by the community. People can now tour the gardens and the remains of the mill and learn about the unique history surrounding this location as it survived several wars. 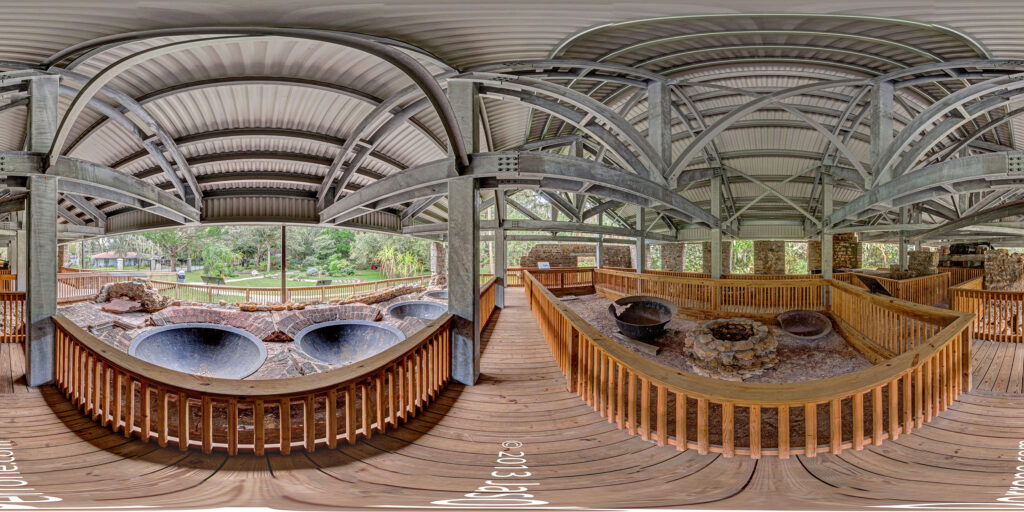 View more abandoned Sugar Mill Ruins in Florida. Do you have 360-degree panoramic images captured in an abandoned location? Send your images to Abandonedin360@gmail.com. If you choose to go out and do some urban exploring in your town, here are some safety tips before you head out on your Urbex adventure.

[…] and sugar mill ruins such as the Bulow Plantation which is only 9 miles down the road or the Dunlawton Sugar Mill Ruins in New Smyrna Beach, […]

[…] more about the park on the Florida State Parks Website. Another interesting place to explore is the Dunlawton Sugar Mill Ruins in New Smyrna Beach, […]

[…] the few tourists who trickled through. The park also included a recreated Seminole village, the historic sugar mill ruins, and live animals, including its namesake baboon. A miniature train whisked visitors by the […]