Explore the abandoned Space Launch Complex 16 at the Cape Canaveral Air Force Station in Florida with this 360-degree panoramic virtual tour of the abandoned aerospace property.

About the launch complex 16

Built in the 1957 at a cost of $4,859,018 by the United States Air Force, Launch Complex 16 is a historic launch pad at the Cape Canaveral Space Force Station in Florida. On February 19th 1959, the Air Force accepted the complex after the construction was complete. On December 12th 1959, the Air Force launched the first Titan I missile and they launched the last one from LC-16 on May 27th 1960. During this time frame, a total of 6 Titan I missiles were launched. A couple of years later, the Air Force launched the first Titan II missile on March 16th 1962. The last of Titan II missile launch from complex 16 was on May 29th 1963 with a total of 7 Titan II launches from the complex.

After the last of the Titan II launches in January 1965, the site was assigned to the National Aeronautics and Space Administration (NASA) to support the static firing tests of the Apollo Service Module propulsion engine and Gemini crew processing. During this time a test stand was built for the static tests.

In 1969, complex 16 was deactivated and then in 1972 was returned to the U.S. Air Force. Around this time it was reassigned to the U.S. Army for training NATO troops in the firing of the Pershing Missile. On May 7th 1974 the first Pershing 1A missile was launched from the complex and the last launch was on October 13th 1983. A total of 88 Pershing 1A missiles were launched from complex 16 during the 9 year period. When the training was going on there could be as many as 6 Pershing mobile launchers positioned on the two unpaved areas in front of the blockhouse.

On July 1982 the first of 49 Pershing II missiles was launched with the last one launched on March 21st 1988. Around 1988, launch complex 16 is deactivated and abandoned in place in accordance with the Intermediate Nuclear Force (INF) Treaty

In 2019, an aerospace startup called Relativity Space is leased the site for their 3D-printed rockets and has a 5-year multi-use contract for the launch site. Relativity Space plans on launching their Terran 1 launch vehicle from this site. 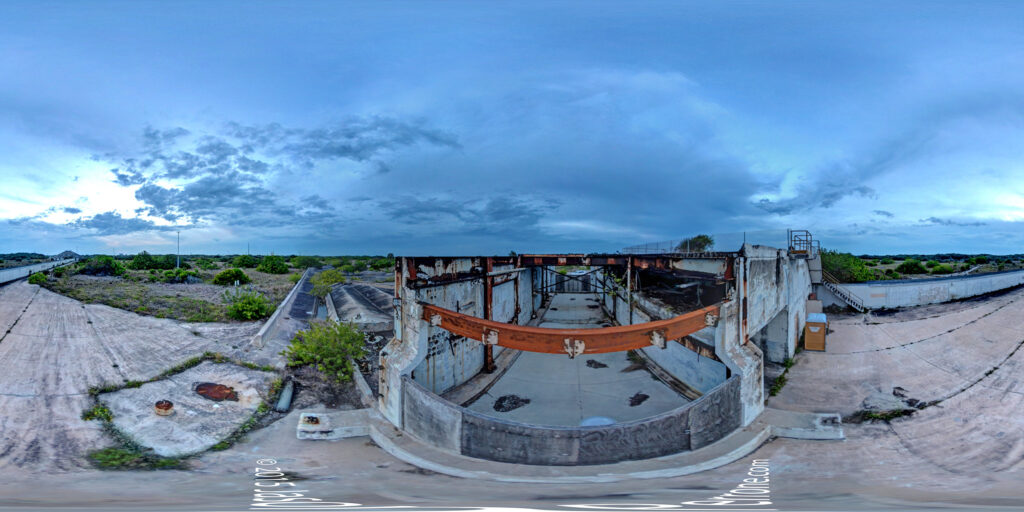 Equirectangular panoramic image captured at the abandoned Launch Complex 16 at the Canaveral Space Force Station next to the Kennedy Space Center.