Look around the Beech Grove School with this amazing 360-degree panoramic virtual tour of the school that is now abandoned in place. There are six panoramic images in the virtual tour so make sure to explore all of the images.

There are only a few small buildings that remain of the community that lived within Cataloochee in the Great Smoky Mountains National Park. The buildings that do remain contain fragments of history where people can go to explore and learn about what life was like over a hundred years ago. Whether you are an urban explorer or any everyday tourist, hiker, or just passing through, there is a number of easy-to-access sites within Cataloochee where you can take a detour and enjoy.

There were a few small schools were built in nearby areas to educate the children of the Cataloochee community. As the community grew, the community rallied for a larger building, and Beech Grove School was built as a result.

Here is an 8K 360-degree video of the school

The History of Beech Grove School

Education was important to the residents of Cataloochee, and they followed the requirements of the state of North Caroline for education. Classes for students of the community were held from November through January and longer if funding allowed. As the population of Cataloochee grew, the schools were too small to handle the growing population. The township sent a delegation of people to Waynesville to request a new school large enough to house the children properly. Officials rejected their request stating that the community did not pay enough taxes to warrant the new school building.

On the way home, the delegation, consisting of Hiram Caldwell, George Caldwell, and Steve Woody, after having a few drinks of whiskey, decided to burn down the old schoolhouse. They first removed all the old furniture and anything important before setting the schoolhouse ablaze. They returned to Waynesville officials claiming the school had burned down, and the officials had no choice but to comply due to the North Caroline school attendance laws.

Beech Grove School was the replacement school that still stands today. It is located near the Cataloochee Entrance Road. Visitors can park in a parking area and walk a short distance to the school’s clearing.

The school is simple with only two rooms and high ceilings and is open for people to visit. There are beautiful tall windows that let in a lot of the natural light. The rooms are furnished with old school desks, and the walls still have the old chalkboards hanging on their walls. Just outside of the school, you can enjoy the wildlife, natural surroundings, and the creek.

A visit to the Cataloochee Valley can be an incredible experience for anyone, whether you’re an experienced urban explorer or anyone passing through. The buildings that remain are easy to access and safe for just about anyone and can provide you with a glimpse of what life was like in another time.

This is one of many remaining historical buildings that were abandoned when the national park was created for future generations to enjoy. While technically not abandoned, these are abandoned in place and maintained by national park rangers and volunteers. You can also visit the Hiram Caldwell House, Steve Woody House, Jarvis Palmer House or the near by Palmer Chapel Methodist Church when you visit the Cataloochee area of the Great Smoke Mountains National Park. 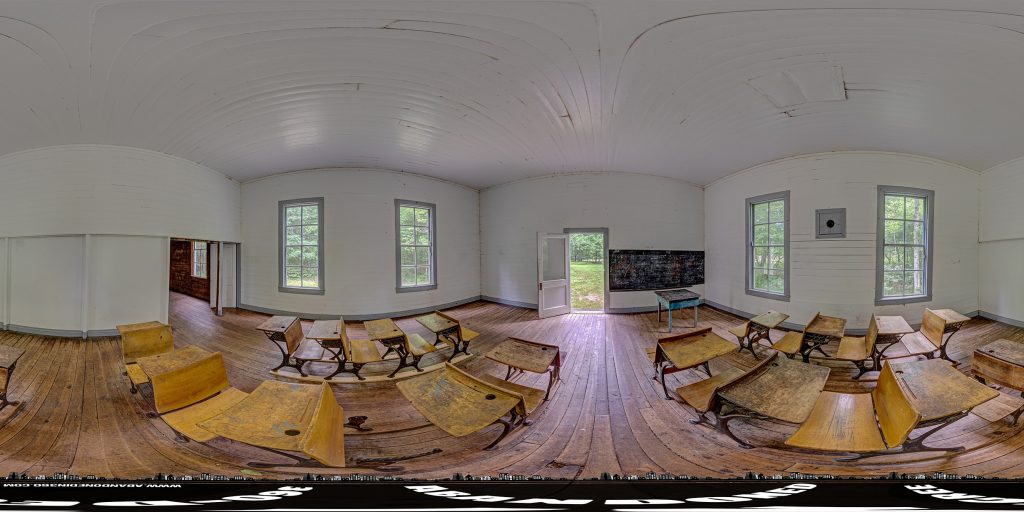 Equirectangular projection of one of two classrooms inside the Beech Grove School in Cataloochee, North Carolina.

[…] can also visit the Hiram Caldwell House, Steve Woody House, Beech Grove School or even the Jarvis Palmer House which are all […]

[…] out some other locations near by such as the Beech Grove School, Steve Woody House, Jarvis Palmer House or even the Palmer Chapel Methodist […]

[…] nearby locations that you might find interesting include the Beech Grove School, Palmer Chapel Methodist Church, Steve Woody House or the Hiram Caldwell […]