Check out these amazing 360-degree panoramic images captured at the mysterious ruins of the Old Fort Park in New Smyrna Beach, Florida. Click the image below to look around the historic ruins.

About the Old Fort Park

New Smyrna Beach is a city in Florida just down I-95 from St. Augustine, with a contested history that has some people thinking it is the true sight of North America’s oldest city. Old Fort Park is a gem in New Smyrna Beach, but one not associated with the Spanish as is most typical of old Florida forts. New Smyrna itself was established by a Scottish physician named Andrew Turnbull in 1767, early into the “British” period of Florida which lasted from 1763 to 1783.

The Old Fort Park itself is named in honor of Turnbull. Turnbull came to the site with a motley assortment of 1,500 Greeks, Italians, Minorcans, and Corsicans with the hopes of growing crops such as sugar cane and indigo which Florida’s soil was known to be perfect for. However, disaster would beset the party in the form of attacks by Native Americans, food shortages, the conditions natural to Florida but much more intense to those settlers not native to the area.

The awfulness of these conditions would eventually see the colonists (or what was left of them) cut and run for St. Augustine in 1777. Doctor Turnbull would eventually find his way to Charleston, South Carolina in 1778, leaving what was left of his half finished mansion and the old coquina walls to the environment. Turnbull never wrote of the walls, and many assume they were constructed well before he arrived, as they are of the same material the Spaniards used in St. Augustine in the 1660s.

The mystery of the Old Fort ruins may never be solved, as many conflicting points of view are still spread out amongst generally acceptable hypotheses. The mystery attracts plenty of tourists each year for the town of New Smyrna Beach, and that mystique bleeds over into the modern day. 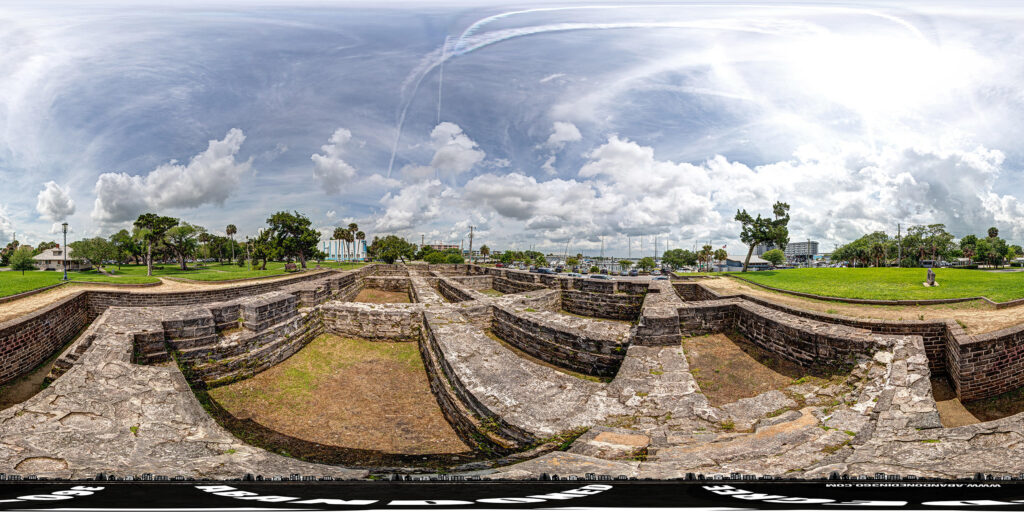 You can find the ruins here on Google Maps. View more ruins in 360-degree virtual tours on our website. Do you have 360-degree panoramic images captured in an abandoned location? Send your images to Abandonedin360@gmail.com. If you choose to go out and do some urban exploring in your town, here are some safety tips before you head out on your Urbex adventure. Here is a list of all the abandoned locations around the world that are featured on Abandoned in 360 website.

[…] Florida properties you might be interested in – The Joe Taranto Seafood Company, the Old Fort Park, or these mysterious “Elf […]