Take a look around the Kingsley Plantation on Fort George Island in Jacksonville, Florida with these amazing 360-degree panoramic images captured at the historic site.

About the Kingsley Plantation

The Kingsley Plantation is located on Fort George Island, at the mouth of the St. John’s River, and at the center of Spanish colonization efforts in North America from the early 1500s onwards. While the current park is sited on about sixty acres, the original plantation as gifted to John “Lightning” McQueen by the Spanish in 1793 was around 1,000 acres. McQueen, a veteran of the American Revolution, settled with 300 slaves and began construction on an architecturally unique plantation.

Economic misfortune saw the estate pass to a Georgian for several years until slave magnate Zephaniah Kingsley bought the land and buildings for $7,000 in 1814. Zephaniah Kingsley was an English-raised slave trader and shipping magnate who had moved from colonial South Carolina to Florida in the late 1700s. By the time he purchased Kingsley Plantation, he had been married to his first wife (Anna Madgigine Jai, a former slave) in 1806 when she was 13 and he was 41. This was not an uncommon occurrence in Spanish Florida, which had a whole class of free mulatto people.

Zephaniah Kingsley was a man who was fiercely proud of his mixed race family, he had children with at least four different former enslaved women that he considered his wives. Even though Kingsley had mulatto family and was extremely proud of them, he was also a very serious slave trading magnate who owned multiple plantations of his own, including Kingsley Plantation on Fort George Island. The layout of the slave quarters on Fort George Island was known to be unique amongst all antebellum plantations. Laid out with 32 slave quarters in a semi circle with the main house in the middle point between the two furthest quarters, it is thought to have been designed like this personally by Kingsley’s first wife Anna.

Most of the slaves that Kingsley had on his plantations were of West African origin. Especially Igbo and Calabari people from the deltas of the bights of Benin and Biafra, if this is Anna’s origin as is expected, it would explain the layout of the slave quarters as it would follow the traditional layout of a West African village, with the king’s house in the middle and a semi-circle of houses splayed out before it. Kingsley’s slave quarters were built to keep his slaves happy, and Kingsley, being an unusual slave owner of the time, would arm his slaves for their own protection, teach them to read, write, and teach them trades and crafts, many would use these skills to buy their freedom, but the main purpose of all this was to fetch Kingsley a higher return on his slaves at market.

Kingsley’s unique life and circumstances contributed to a truly unique plantation with a totally unique arrangement and layout, with quarters much nicer than were typical of plantations of the era. 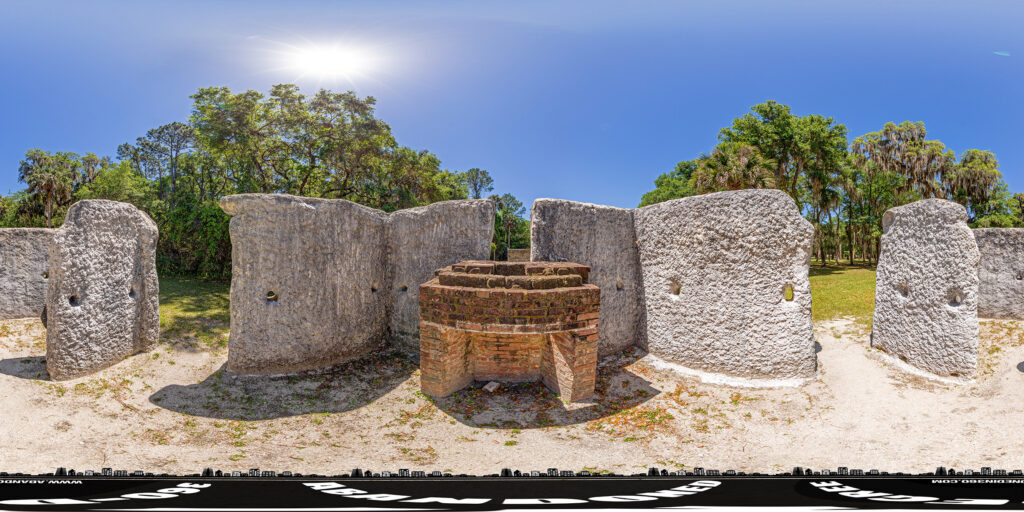 A 360-degree panoramic image captured inside a tabby slave house at the Kingsley Plantation on Fort George Island in Jacksonville, Florida.

Here is a list of all the abandoned locations around the world that are featured on Abandoned in 360 website.

The Neff House & the Betz Mystery Sphere - Abandoned in 360 Reply

[…] Apalachicola River Inn in Apalachicola, Florida. Down the street from the Neff House is the Kingsley Plantation that you might find fascinating as well or even the Huston House at Butler Plantation in […]

[…] you like historic locations or ruins here are some other posts you might be interested in, the Kingsley Plantation, the Old Fort Park, the Bulow Plantation Ruins, or the Dummitt Plantation […]

[…] Florida mansion interesting. The Neff House, in Jacksonville is located down the street from the Kingsley Plantation. Another interesting historical landmark is the Disston Sugar Mill Ruins in St. Cloud, […]